Beginner Guitar Tips And Songs You Can Play Without A Capo

https://playguitarnotes.com/beginners/easy-guitar-songs-for-beginners-without-capo/ Learning guitar can seem very intimidating at first, especially if you are trying to dive right into learning complicated songs without nailing down the basics. For a beginner, it is important to get a solid foundation in how a guitar is played, from the names of strings to the proper strumming technique. Then, it is possible to move on to some basic songs to help expand your abilities. Read on for some tips on how to go from total guitar novice to playing your first song.
Posted by Play Guitar Notes at 8:25 AM No comments:

http://playguitarnotes.com/beginners/basic-guitar-chords-for-beginners/ Most of the learning guitar is learning chords. For a beginner, there are eight incredibly commonly used chords that form the basis of a lot of modern music. Luckily, these chords are also quite easy compared to some more advanced ones! First, it is important to know the names of the strings. Low E is the lowest sounding string, followed in ascending order by A, D, G, B, and high E. We will be referring to these strings for chord directions. The simplest commonly used chord on the guitar is E minor, usually written as Em. Em is a great beginner chord because it only uses two fingers! This chord is comprised of the notes E, B, and G. Since E, B, and G are four of the open strings, we only need to play a B on the second fret of A, and an E on the second fret of D. Simple!
Posted by Play Guitar Notes at 8:24 AM No comments:

https://playguitarnotes.com/online-guitar-lessons/ Are you trying to start learning or get better at playing the guitar? Well, the truth is that you’re not alone and you have probably heard rumors that the guitar’s one of the most difficult instrument to master. However, that is not always the case because with the right courses to follow this instrument can be one of the easiest to learn. Moreover, the advent of online streaming service has significantly revolutionized the manner in which music enthusiasts learn guitar. Gone are the times when you had to go through a pipeline of private instructors charging extortionate hourly rates and putting you through repetitive exercises to perform under their watchful eye. Currently, anyone who wants to master the guitar can select from the myriad of lessons that offer the benefits of a private instructor in the comfort of your home. The biggest problem with having many affordable and convenient learning options is settling on one that is right for you.
Posted by Play Guitar Notes at 8:22 AM No comments:

https://playguitarnotes.com/childrens/best-kids-guitar/ Learning how to play an instrument is extremely beneficial to a child’s development. It requires motor skill, coordination, timing, and concentration. The ability to listen and observe is trained, and it vastly enhances your kid’s communication and problem-solving skills. Apart from that: it’s also a lot of fun! Especially the guitar is an instrument that is very attractive to children for several reasons.

https://playguitarnotes.com/accessories/best-guitar-straps/ If you’re a performing artist, a lot of thought goes into your look onstage. On the hand, we are musicians, but on the other hand, we are also showing people, and with our gestures, outfits, and style, we amplify our music’s message to create a multi-sensory experience for our audience.
Posted by Play Guitar Notes at 5:30 AM No comments: 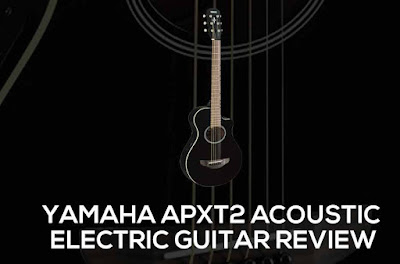 If there is one word you can use, to sum up, the Yamaha APXT2, it would be compact. This is a smaller, yet powerful instrument and one of the best budget buys on the market. But what inspired its creation? The best-selling guitar by Yamaha, namely the APX500II. For the well-known manufacturer, there was a specific market in mind upon release, which will also be covered in this Yamaha APXT2 review.

At 36.2 inches in length and a body depth of 65 - 75 millimeters, there's no denying the relatively small size. The nut measures at 43 millimeters, which is a nice touch because it leaves more than enough finger room given the size. Overall, the APXT2 is 3/4 the size of the best seller.

The materials that were used to craft the guitar are quality choices, for example, the mahogany neck and the Sitka spruce top. The back and sides were made from meranti and the fretboard is, of course, Rosewood, along with the bridge. The only part of the guitar that doesn't feel like the quality is the tuner keys. However, considering the price and purpose it's a lower quality component you can overlook.

In terms of design, it's got a single cutaway and you can choose between several different colors. These include a black and old violin sunburst finish, in addition to a natural or dark red burst.

It's time to get to the good stuff, namely the electronics that bring another dimension to this acoustic-electric axe. It comes with the A.R.T (Acoustic Resonance Transducer) system, which is one of Yamaha's signature pickup designs.

Within this system, you'll find a built-in tuner for convenience, but also a mid-boost equalizer that gives you control over tone shaping. Of course, you can control the volume and all the other basics such as treble and bass as well

What makes the transducer so effective is the natural sound it delivers through an amp. By blocking out the excessive vibrations from the soundboard and focusing on small resonances, it never loses its acoustic touch.

Okay, it's not the perfect guitar. For one thing, the edges of the fretboard are rather sharp, which is not a common sight with a Yamaha guitar. Where it's usually a very comfortable and smooth grip, the more distinct edges can annoy certain players.

There's also the question of the low action, which is going to be a preference choice. If you like the idea of pushing the limits of getting fret buzz when hammering some rough riffs, the low action isn't going to bother you. But for those looking for a more crisp sound, the low action can be annoying.

But the faults of the guitar can't really compare to the advantages. The materials have already been mentioned, but it should also be known that Yamaha is a manufacturer that allows a strict curing process during production, giving their guitars great durability. Chances are you can give it to your unborn children to practice on. 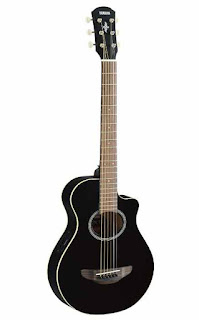 Then there's the convenience of the size, bringing us to the target market for the APXT2. First and foremost, it's considered an entry-level guitar. In other words, it’s meant for beginners of all ages. This is also why it probably has such a low action because it makes chording more comfortable.

But if you listen to the amazing sound of the guitar you can easily see it will benefit musicians who travel a lot and want to play in cramped spaces. Thanks to the high-quality design and sound, professional can add it to their collection of practice instruments or use it on stage if the situation calls for it.

However, the beginner level is the end of the road for serious players in general. The APXT2 will do more than just aid you on your journey of discovery, but you'll probably start looking for something more in line with your skills.

As with most quality brands, there aren't really any limitations as to the style of music that can be played. In fact, it's mostly about giving kids and grownups the opportunity to cut their teeth on a guitar that doesn't break the bank but also delivers a sound that motivates you to keep going.

Considering the price, practicality, quality, visual appeal and the close relation to one of the best guitars on the market, the Yamaha APXT2 blows many competitors out of the water. It's lightweight but durable enough to be handled by experienced players. It's small and can easily be carried around. But more importantly, it has a great balance between plugged and unplugged sound. When you think about it, this ax is more of a companion than an instrument really.
Posted by Play Guitar Notes at 6:59 PM